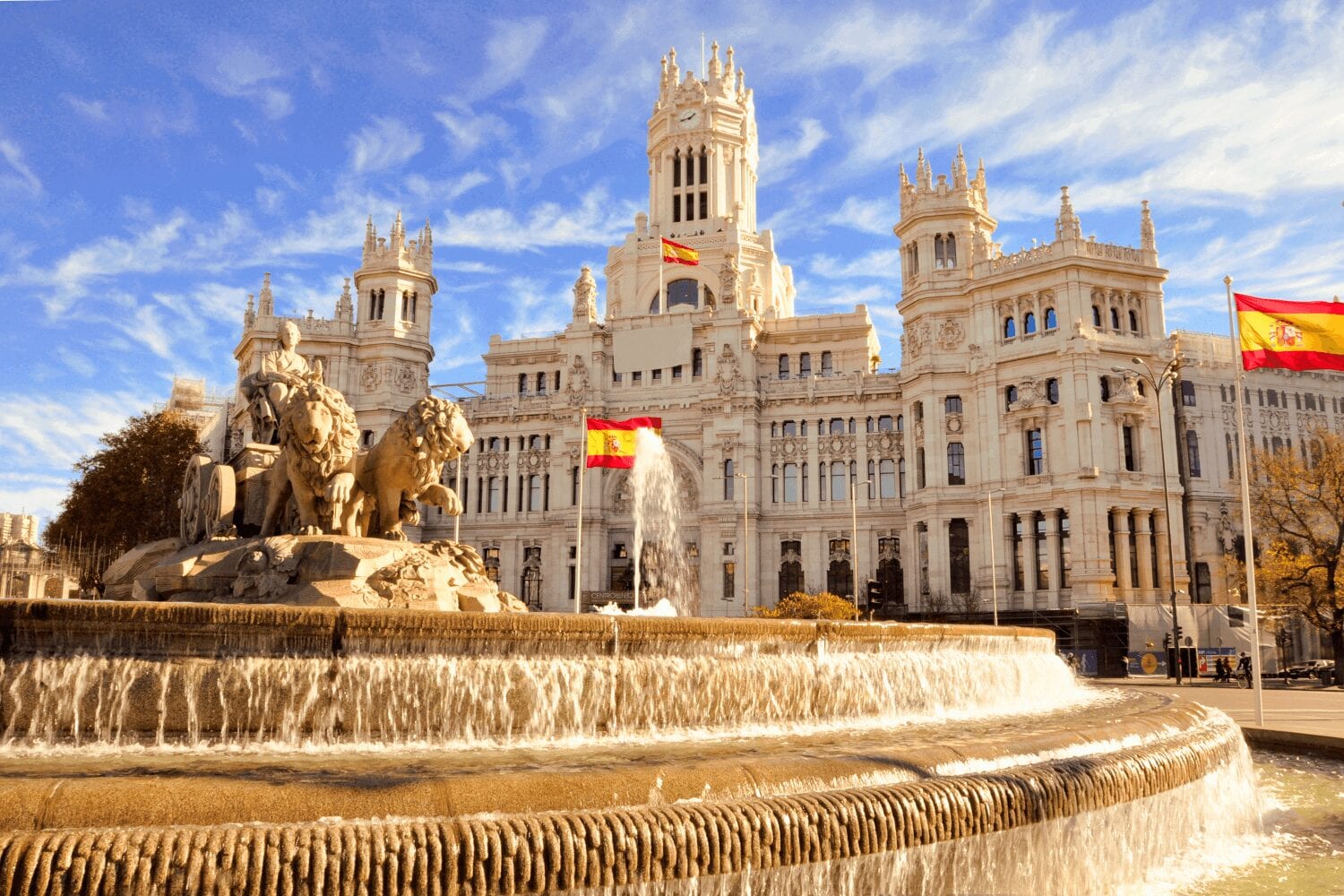 Once an insignificant medieval city, Madrid is now a European capital city to be reckoned with, an artistic and cultural hub with a vibrant foodie scene and exciting nightlife.

Tapas is one of Spain’s biggest exports and there is no better place to sample some than in the capital. And there is certainly no shortage of places to grab a few plates; Madrid has around 15,000 bars and restaurants to enjoy. Most people have heard of the most popular tapas dishes, such as tortilla de patatas, jamon, and patatas bravas, but in Madrid, there are also some dishes which ...

Once an insignificant medieval city, Madrid is now a European capital city to be reckoned with, an artistic and cultural hub with a vibrant foodie scene and exciting nightlife.

Tapas is one of Spain’s biggest exports and there is no better place to sample some than in the capital. And there is certainly no shortage of places to grab a few plates; Madrid has around 15,000 bars and restaurants to enjoy. Most people have heard of the most popular tapas dishes, such as tortilla de patatas, jamon, and patatas bravas, but in Madrid, there are also some dishes which are specific to the city which you can try too. Croquetas are a staple of Madrid tapas menus and have a variety of fillings. Albondigas – yummy meatballs – are also a big favorite, as are garlic shrimp.

A City of Great Art and Architecture

Madrid is filled with architectural gems that effortlessly combine the old and new. Of the historical sights, the Royal Palace, the Plaza Mayor, the Basilica de San Francisco El Grande, Buen Retiro Park, and the Debod Temple are among those you should not miss. But the modern architecture is just as interesting. The Cuatro Torres Business Area has a number of sleek skyscrapers, including Spain’s second tallest building. The city is also great for art lovers; there are three main world-class art galleries – the Museo del Prado, Museo Thyssen-Bornemisza, and Centro de Arte Reina Sofia – which house works by some of the art world’s greatest names, including Picasso, Dali, Bacon, and Goya. But there are also many other smaller art galleries that are worth checking out too.

The locals in Madrid are known for their sense of style and they certainly know how to shop. From trendy high street names to unique independent boutiques, there is something for everyone in the Spanish capital. The district of Salamanca is Madrid’s answer to London’s Bond Street, with designers such as Hermes, Chanel, Hugo Boss, and Louis Vuitton. Calle Toledo is where you can find traditional Spanish shops selling wares such as leather goods and rope-soled shoes. Chueca and Fuencarral are the more bohemian areas; Chueca is particularly good for shoes. There are also plenty of markets dotted around the city, the most famous being the weekly Sunday El Rastro.

The Spanish are well known for enjoying a good night out and Madrid is no exception to that. As well as the numerous tapas bars, Madrid offers a myriad of nightlife options, from typically Spanish cafes to pulsing nightclubs. On a warm summer’s night, it is recommended to head to one of the city’s rooftop bars and take in the splendid view. As with all Spanish destinations, people tend to start their nights out later, so you will find that many bars do not open until around nine or ten in the evening.

If you are looking for blue skies, Madrid might just be the place to visit on your next trip. With dry weather and low amounts of rain, the city provides sunny days throughout the year.

You can expect hot summers and cold winters, both with little precipitation throughout the season. Spring and autumn have cooler weather but will also have a few more wet days. The warmth of late spring and summer usually drives activities around Madrid outside and to the evenings for cooler temperatures. Also, many events will take place out on the terraces to take advantage of the nice weather.

A great way to enjoy the best weather is to attend one of the many yearly events that are taking place when you want to visit. Each September brings the White Night Festival (La Noche en Blanco) and its exhibitions, concerts, and art performances.

On every 15 May, celebrations for San Isidro, the patron saint of the city, have religious ceremonies and parades happening across the city. The La Paloma Festival is an annual event in August and is a traditional street celebration to praise the Virgin of La Paloma.

Spain is a member of the European Union and the eurozone so uses the euro (symbol: €) as its currency. The euro is a bit stronger than the US dollar with 1 euro equaling around 1.20 USD.

The banknotes being issued for the euro come in denominations of 200, 100, 50, 20, 10, and 5 euros. Coins come in both euros and cents with values of €2, €1, 50c, 20c, 10c, 5c, 2c, and 1c. But carrying lots of cash will be unnecessary while you’re in Madrid since ATMs are plentiful around the city and most places will also accept credit cards as payment. Watch out for a few establishments that might require a minimum purchase to use your card.

Tipping is entirely optional and up to you while in Madrid. If you feel like the service you received is deserving of a tip, then go ahead and leave a few extra euros or the loose change from your bill.

Otherwise, nobody will say anything if you get up and leave with no tip left behind. If you see IVA NO INCLUIDO (VAT NOT INCLUDED) on a bill at a hotel or restaurant, that means the tax was not included in the price. Expect around 10% to be added to the total when you go to pay.

Spanish is the official language of Spain and while visiting, you should expect most of your encounters in Madrid to be with Spanish-speakers knowing little to no English. Even though around 75% of Madrileños (citizens of Madrid) are native to Spain, most of Madrid’s immigrants are from Spanish-speaking countries in the Americas, which reinforces the need for knowing a little Spanish.

When planning your trip, buying a Spanish phrasebook and memorizing a few core phrases will go a long way in making your trip smoother. Below are a few of the most common phrases to help you in every interaction:

Madrid has one of the best, the second largest (after London), and one of the least expensive public transportation systems in Europe, to the benefit of millions of tourists and Madrileños each year.

There are single ride passes and day passes but for tourists, they have a Tourist Card that can be used on all options: the metro, the bus, and the train systems. A 3-day pass is less than 20 euros and will get you to most parts of the city that you will want to visit. If you do have plans to visit the suburbs or surrounding communities, another option with a wider range costs around 35 euros.

Taxis are another option to get around the city. The taxis that are available to pick you up will have a green libre sign on the windshield and on top of the taxi, there will be a green light.

Two things to note about taxis are that they can be difficult to find during weekend nights and that most drivers will not speak very much English. Be sure to grab your hotel’s business card with its address and try to have any destination you're heading to written down in Spanish.

With so many people on the streets and varying forms of nightlife all around the city, Madrid is a relatively safe place to walk around without worry or fear.


Of course, be aware of your surroundings and take the usual precautions as you would in any major city. Pickpocketing can happen so be sure to watch your belongings when you are in crowded areas or on public transportation.


Certain scams are possible, but not too common, where one person will try to distract you while an accomplice attempts to steal your belongings or makes an effort to pickpocket you.


This distraction could come in many forms such as someone acting deaf or homeless, someone asking for signatures, or someone offering a massage. People leaving bars or clubs late at night are a particularly popular target so don’t bring your valuables to a night out.


If you mind your belongings and stay aware of your surroundings, nothing will stop you from enjoying the royal history and architecture of the Spanish Monarchy in Madrid.