8 Beautiful Churches to Visit in London on your Next Trip

London is jam-packed with architectural masterpieces, from striking skyscrapers to glorious palaces. Some of the most enchanting buildings in the UK capital, however, are its magnificent churches, many of which have witnessed centuries of incredible history. 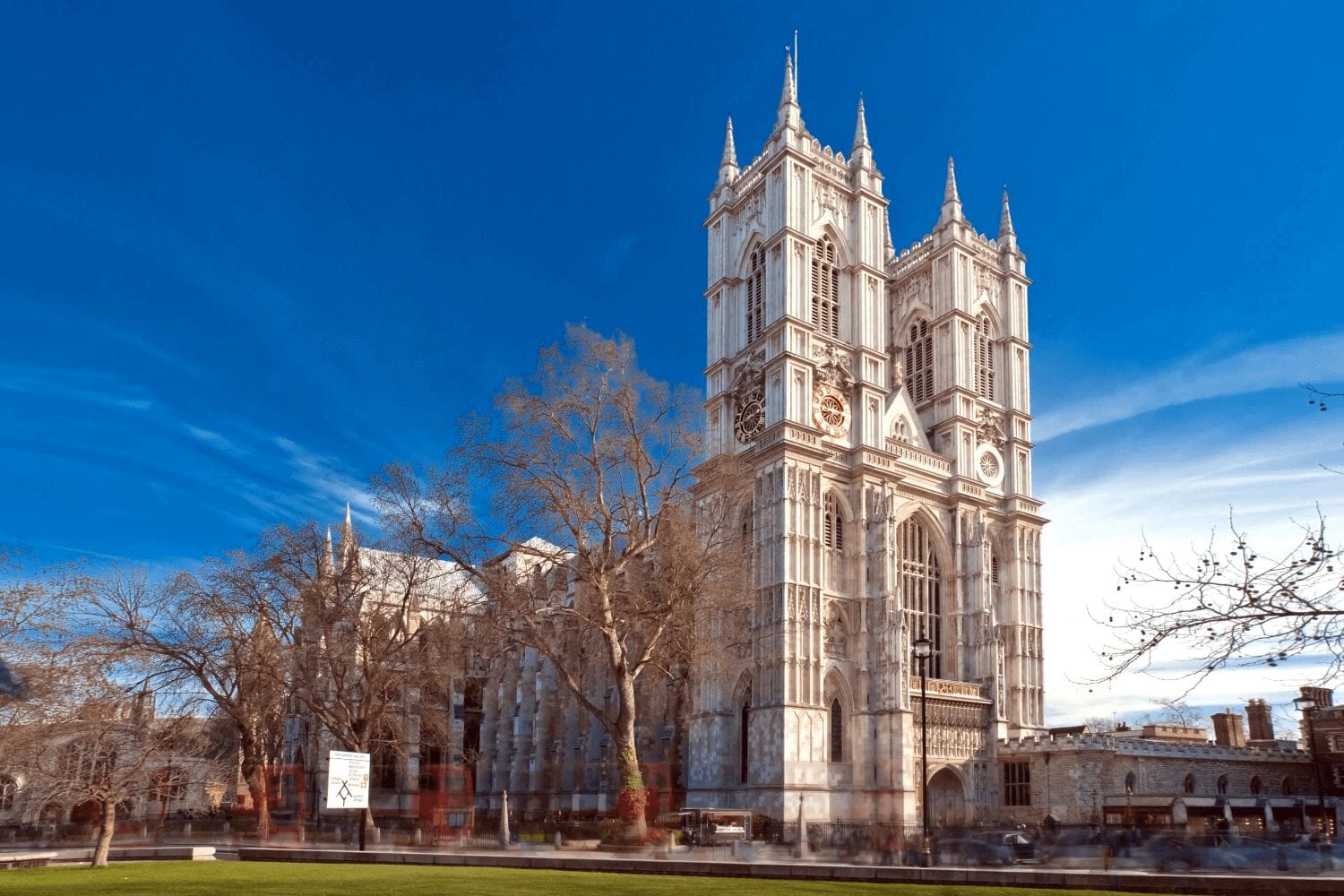 It is not easy to choose from churches to visit in London. Most of them are not just places of prayer but historical monuments and pieces of art as well. They are the best showcases of the history of the city. The churches are popular with all tourists, regardless of their own religion and interest in religion in general.

It is not just that these pieces of rich architectural heritage provide a place for worship and reflection, but many of them also offer concerts and other events. In some of them, you can sit and enjoy your coffee and a light meal. You have to pay an entrance fee to some of them, but the others can be visited for free. What is clear however is that a no visit to London is not complete without a visit to one of these architectural beauties. 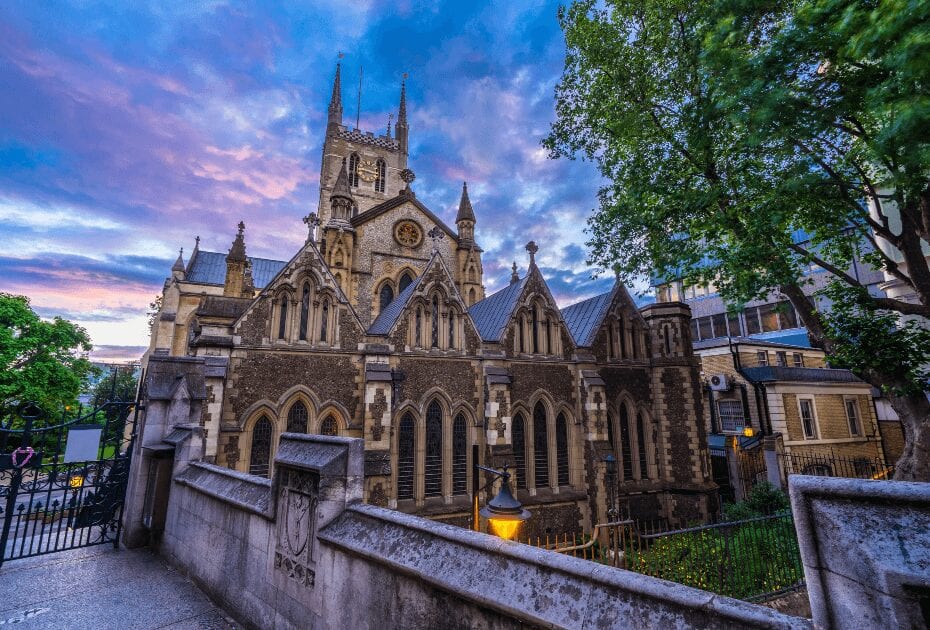 Southwark Cathedral lies on the south bank of the Thames River. It is an Anglican church. Tucked away in the middle of Borough, this historic place of worship is a quiet oasis in the middle of the busy city area. It almost appears out of nowhere as you come off London Bridge, so tourists often miss this magnificent cathedral. The Cathedral is probably the first Gothic church in London, with a mixture of English and French elements. It is an impressive building, homogenous in style and balanced in proportion.

With its iconic crossing tower, several interesting tombs inside, a thirteenth-century oak effigy of a knight in full armor, and many stained glass windows, Southwark Cathedral is a must-visit. In its one hundred years long history, the church was severely damaged several times. It also closely escaped a sad destiny of being demolished and rebuilt elsewhere because of a viaduct construction. The viaduct was constructed, but fortunately, it passes the cathedral, only 18 meters away. 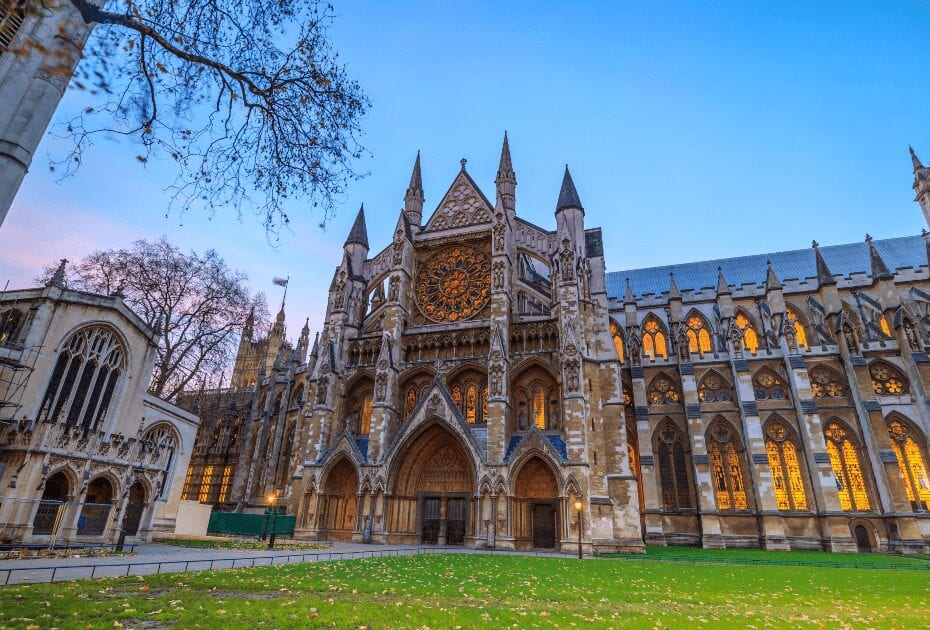 Westminster Abbey in the City of Westminster is the most important church in London, responsible directly to the sovereign with the status of Church of England “Royal Peculiar”. Together with St Margaret’s Church and the Houses of Parliament, it was designated a UNESCO World Heritage site. This impressive building is mainly a Gothic Abbey. According to the tradition, it was founded in the seventh century as a small Benedictine monastery. The construction of the present church began in the thirteenth century.

It has been the Coronation church since William the Conqueror. It still remains a center for regular worship, but it also has a long tradition of lavish celebrations and royal weddings. As a burial site, it shelters the tombs and memorials of more than 3,300 prominent people – sovereigns, statesmen, and many important English subjects, like Isaac Newton, David Livingston, and Ernest Rutherford. Tombs of the poets (Geoffrey Chaucer, Ben Jonson, John Dryden, Robert Browning) lie in the Poets corner. 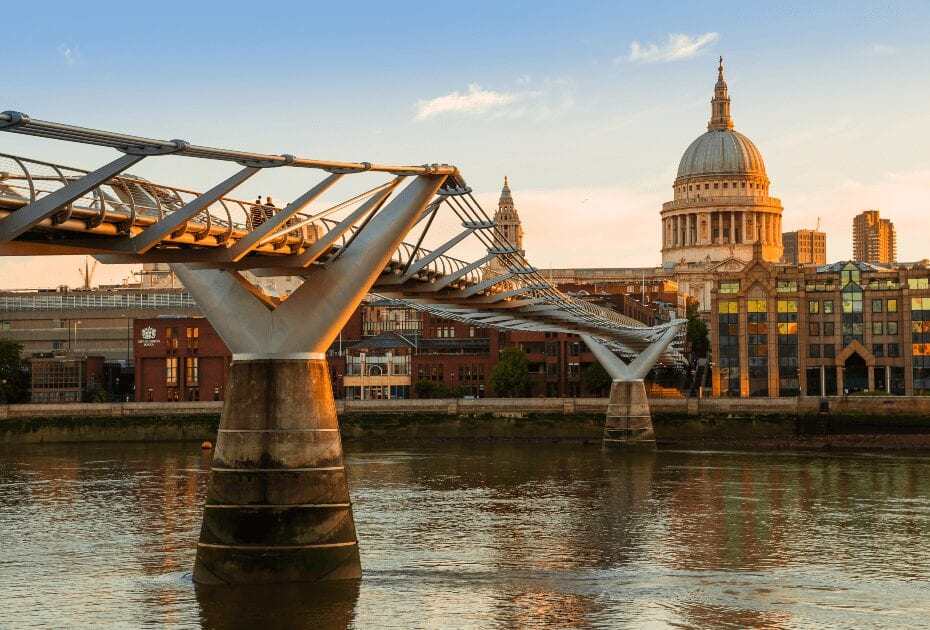 St Paul’s Cathedral, an Anglican Cathedral on Ludgate Hill, is one of the most recognizable sights of London. Its 365 feet tall dome dominated the skyline of London for a long time. It is the second-largest church building in the United Kingdom. The original church dedicated to Paul the Apostle was founded in AD 604. The present construction dates back to the seventeenth century when Cristopher Wren designed it in the English Baroque style combined with Neoclassical and Gothic styles after the Old St Paul’s Cathedral had been destroyed in the Great Fire.

The famous Golden and Stone Galleries offer panoramas of London. Its organ is the third-largest in Great Britain in terms of the number of pipes. Many important services were held in the cathedral: funerals (Admiral Nelson, the Duke of Wellington, Sir Winston Churchill, Baroness Thatcher, and Christopher Wren himself), jubilee celebrations (Queen Victoria, Silver, Golden and Diamond Jubilees, and the 80th and 90th birthdays of Queen Elizabeth II), peace services marking the end of the First and Second World Wars, the wedding of Prince Charles of Lady Diana Spencer and many others. The cathedral is a working church with hourly prayer and daily services. 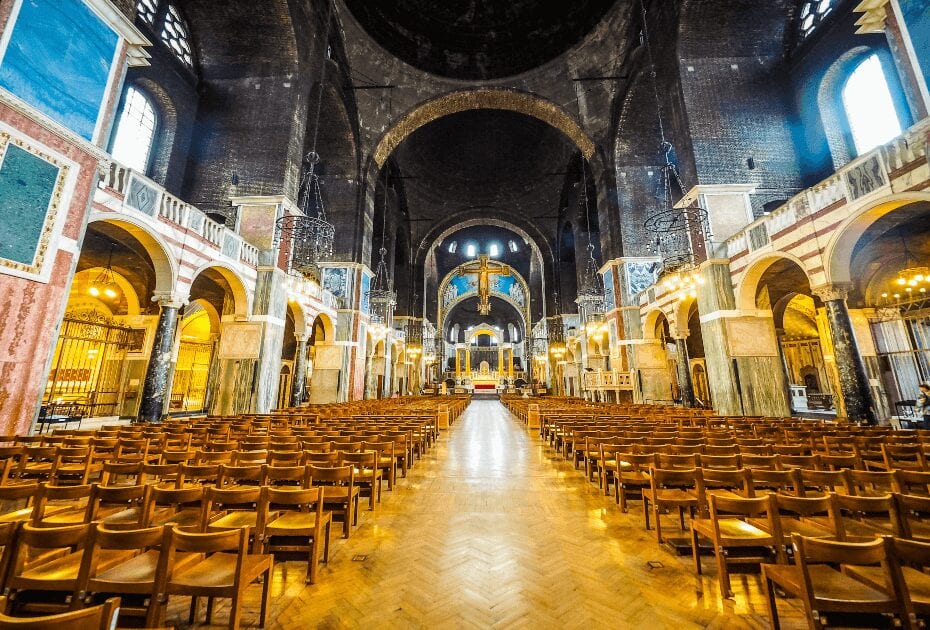 Within walking distance of Westminster Abbey, you will come to Westminster Cathedral, the largest Catholic church in England and Wales. This marvelous neo-Byzantine building is the most impressive example of this style in Europe. On the exterior, built-in multi-colored brick and stone with white stripes, which is quite foreign to the British eye, the most prominent is the tall bell tower. The interior is no less extravagant, designed in Byzantine tradition, with colored marble and lavishing mosaics with pearl, lapis lazuli, and gold. The massive Baldacchino stands above the high altar.

Westminster Cathedral has a great choral tradition. It is not an old church, compared to other London churches. Its construction was completed in 1903. Westminster Cathedral is the seat of the Archbishop of Westminster and the mother church of the Catholic religion in England and Wales. Visitors of all religions are welcome to visit the Cathedral. 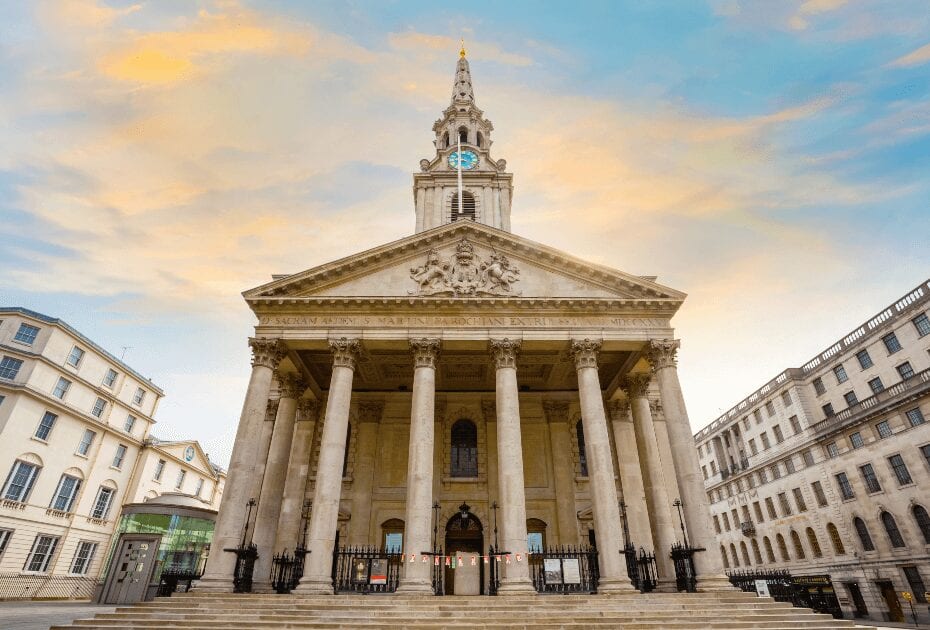 St Martin-in-the-Fields, one of the most famous churches in London, stands at the corner of Trafalgar Square. This church from the eighteenth century is a landmark, with its prominent position and Neoclassical construction. Although it might seem simple in decorations inside, it is so full of light that comes through the tall windows, and music, and kindness. It is known for the regular lunchtime and evening concerts. It is also famous for its work with young and homeless people.

In the cafe in the Crypt, you can listen to jazz concerts and the profits support the programmes of the church. The London Brass Rubbing Centre is also located in the crypt. It is an art gallery, book, and gift shop. The Connection at St Martins located next to the church support 4000 homeless people in London each year.  Every Sunday morning you can listen to the St Martin in the Fields Band of Bell Ringers and the set of twelve church bells. 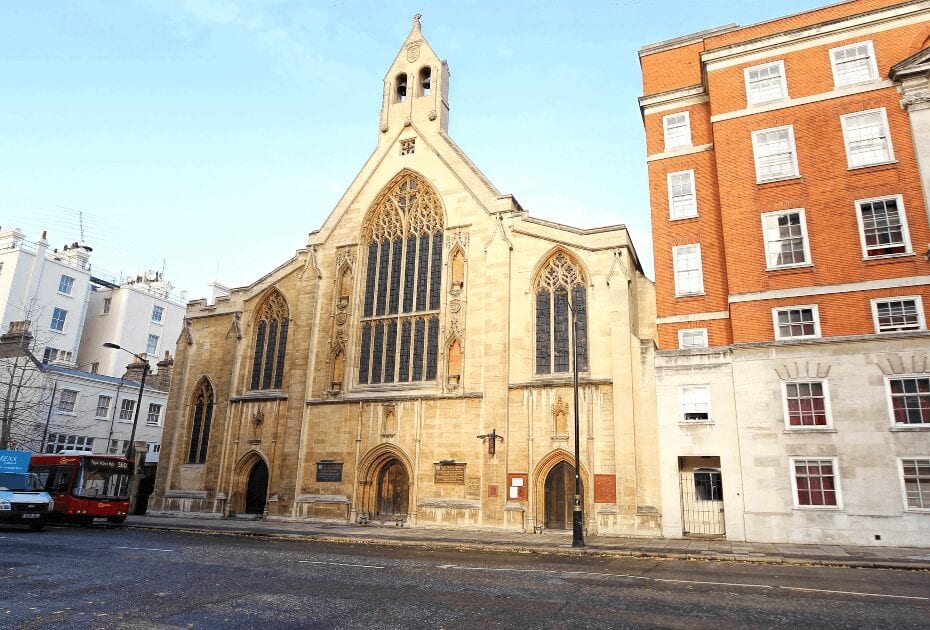 Holly Trinity Sloan Street is a London parish church in Upper Chelsea. This building from the nineteenth century in the style of the Victorian Arts and Crafts movement is the widest London church, exceeding St Paul’s Cathedral by nine inches. With its red brick and white stone bands, it is a truly striking building.

You may easily walk past it without noticing it, as it is set back from the street. It would be a pity not to see its amazing stained-glass windows, the most admirable one being the huge and colorful East Window behind the altar, designed by William Morris and Edward Burne-Jones. Holy Trinity had a reputation for Anglican church music from its early days. With its huge organ, this stunning place offers a selection of liturgical worship and community events and is a concert venue. 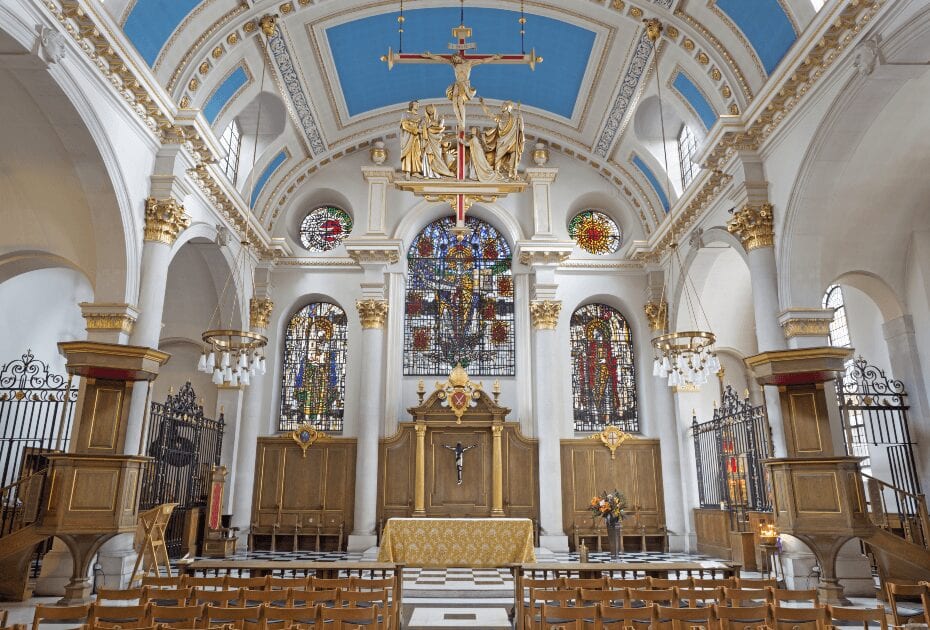 Sir Christopher Wren rebuilt the Church of St Mary-Le-Bow after the great fire of 1666 in the City of London. According to the archaeological evidence, a place of prayer existed in this place in Saxon times. It took seven years after the church had been built to build the distinctive neo-classical tower and steeple.

The oldest parochial building in London, the Norman crypt, is still in use. In the Middle Ages, St Mary’s was second only to St Paul’s Cathedral in importance. Its importance can be measured by the unusual tradition of calculating distances along the road from London to Lewes from St Mary’s church. According to an old saying, true Cockneys must be born within earshot of the bells of St Mary-le-Bow Church.

During the Blitz, bombs almost destroyed the church. The church survived, but the famous bells were destroyed. They were recast in the middle of the twentieth century. This church is a place of peace in the midst of the City. St Mary-le-Bow ministers to the financial industry and livery companies of the City of London. It offers the prayer every weekday.

8. St Dunstan and All Saints 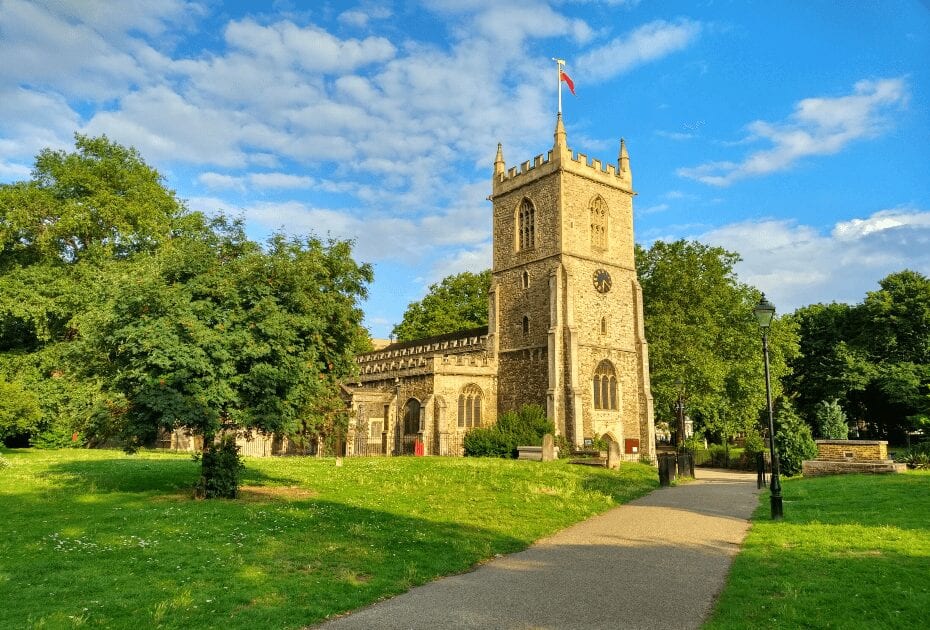 Arguably one of the best churches to visit in London, Dunstan and All Saints is among the biggest medieval churches in the London area and also among the most ancient churches in Greater London. This Anglican church stands on the foundations of an ancient place of prayer from the tenth century. Located in today’s Stepney High Street, it was once the heart of the medieval village that grew around it. It is an elegant church surrounded by a churchyard so large that you get the impression of being somewhere in the country.

Inside the church, there are some beautiful memorials and some fantastic gargoyles on the outside. The spacious yard hides the remains of many of the great plague victims. It might be a bit out of the way for a visitor with plenty of sights in the schedule, but it is worth taking some effort to visit this remarkably well-preserved church and its grounds. 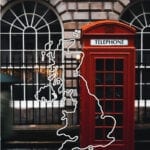 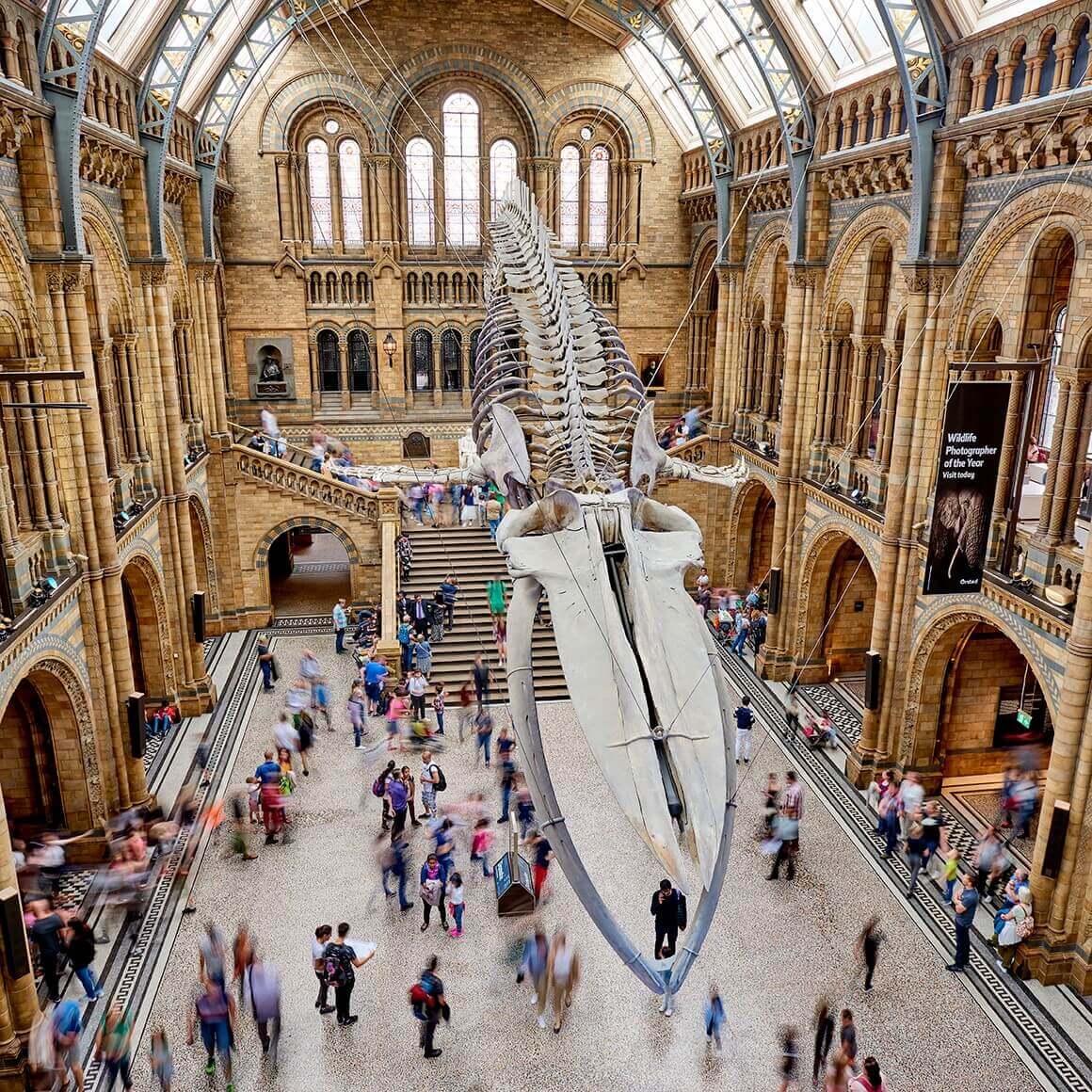 8 attractions in the UK that are free to visit

8 attractions in the UK that are free to visit