There is far more to Indonesia than the resorts of Bali, particularly if you are willing to venture off the beaten track. But first, you will need to survive the country’s sometimes unreliable roads. 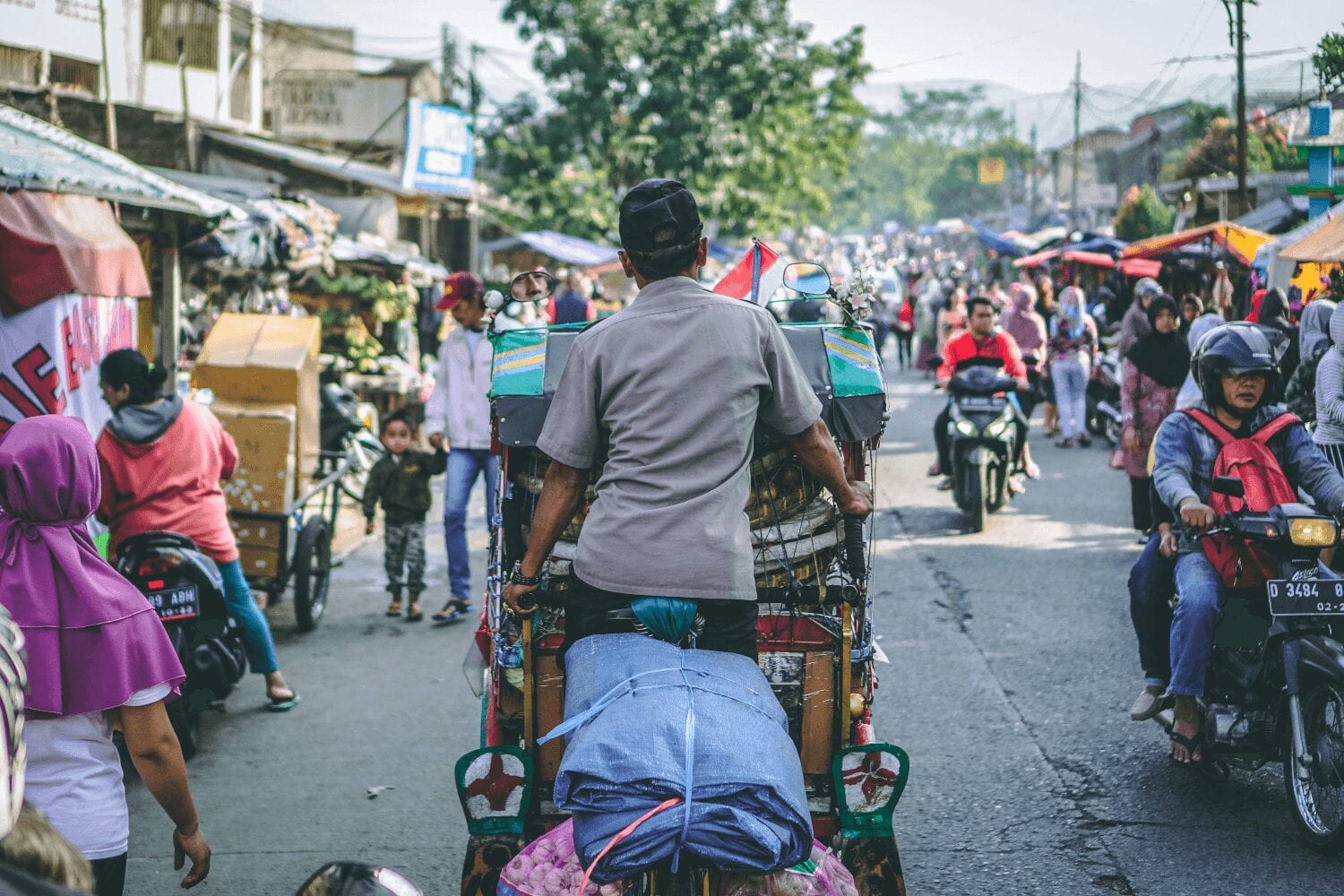 The one thing that Indonesia is not missing is motorbikes. There are hundreds of them around, and they are all potentially deadly, especially in city centers. But there is no better way to explore the just-a-little-to-far sunset point than renting one and joining the crazy Asian traffic. The locals have some sort of superpower by which they can fit three pigs, a boat, or another scooter on their bikes. Sometimes all three. But that’s the next level, for now, here are some tips for mortal travelers to survive the lethal Indonesian roads. 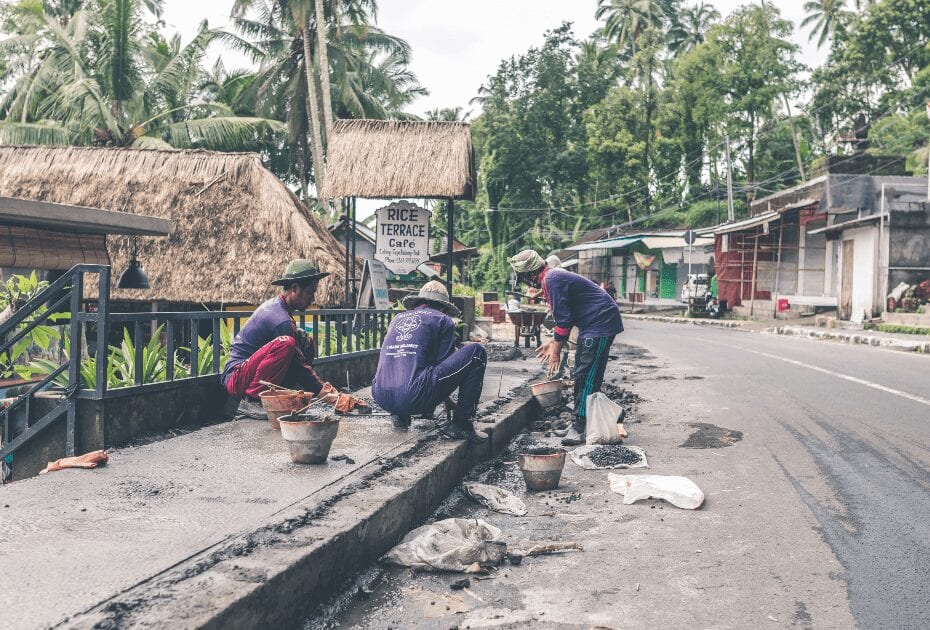 Sometimes they aren’t roads, that’s the worrying part. Google Maps for motorbikes does its best to be a helpful tool, but sometimes it just misses out on the fact that this is Asia and the risks are thus different. While a visit to the grocery store may cause mild stress, a 3 days trip from Yogyakarta to the Dieng Plateau and back can be deadly. The bits of a road marked red or orange on Google Maps might not only mean that there is traffic, but also that the road has turned non-existent. The locals might be aware, so having a conversation with the host could be a good idea. 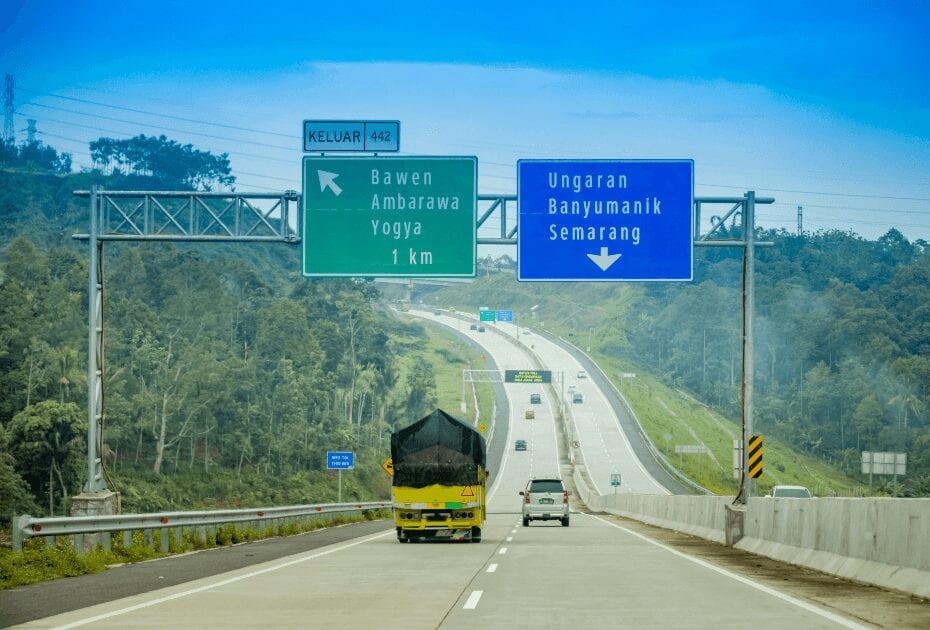 It is often said that the locals in Indonesia drive as if they are walking, there is a general awareness of personal space, even without written laws. The same thing applies to driving, there are no rules, anyone can be turning left or right or just U-turning in the middle of a highway at any given point, yet the traffic would remarkably open up like Moses waters around them. In Indonesia, this is perfectly normal. However, trying this is not for the first-time driver in Asia, it is also worth keeping in mind that most local scooters lack wing mirrors, because what is happening in front of them it’s the only thing that matters. 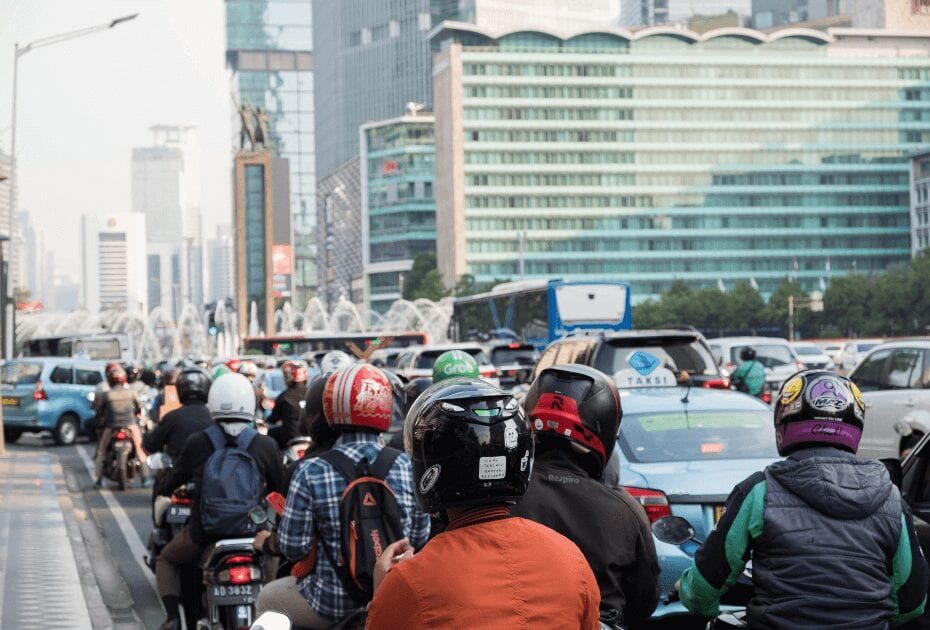 Indonesians drive on the left. There are no other driving rules, however, there are a few habits that the locals use to self-regulate the roads. While it is considered impolite to honk at other drivers in most western countries barring exceptional circumstances, here in Indonesia it is considered a necessity. There are conversations to be had just by honking at other drivers, It can mean “get out of my way” or “I am behind you” or just “I like your bike!”.

Indonesians like to leave it open to interpretations. Overtaking is a must on busy roads, you will find trucks speeding down a road at 70 mph and then having to stop halfway up a hill. For overtaking, there is no rule apart from common sense, you can overtake on the left, on the right, or by going off-road. Provided that there is space, overtaking is possible. 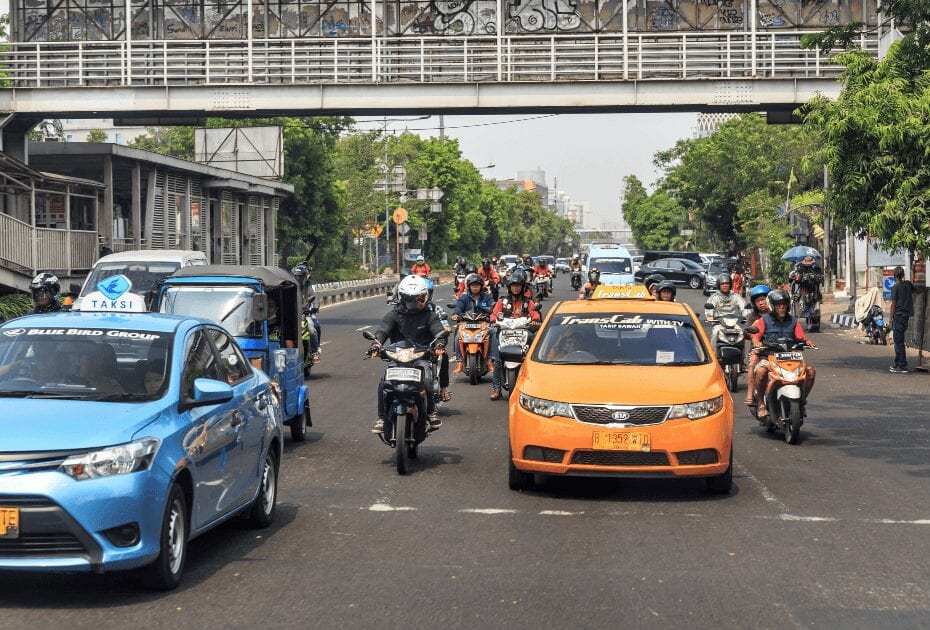 Mopeds or semi-automatics are rented by literally everyone in Indonesia. If the host has one available, he will be happy to share. However, they are never in good condition, and often one or more parts of the bike are missing. The ones that need to be present and fully functioning are the breaks, lights, and of course, the horn. 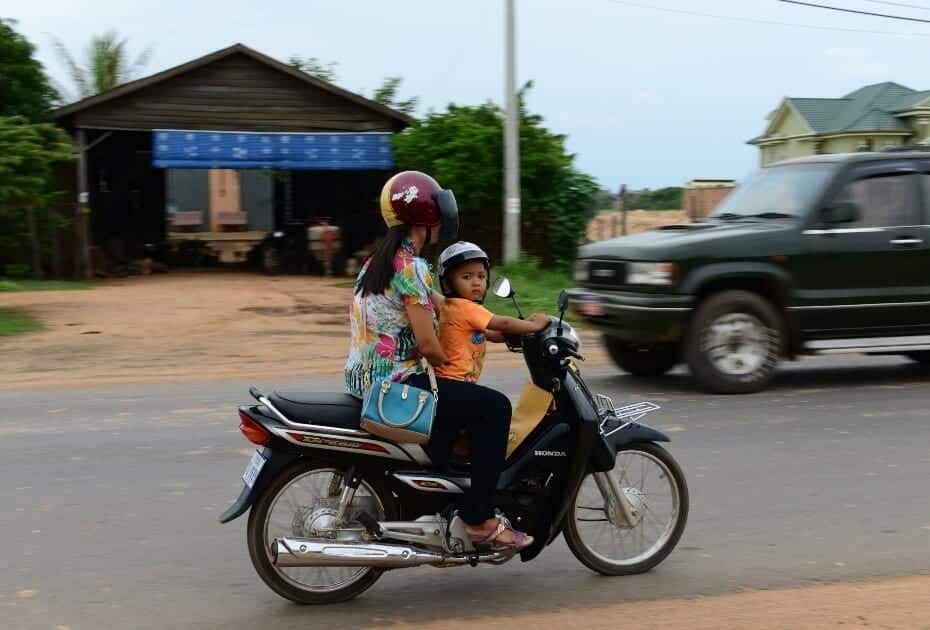 The law requires tourists to have an International Driving License when renting a scooter in Indonesia. In practice, however, 6 years old kids go around in scooters too, which gives you an idea of the extent to which this law is applied. In a police encounter, if the documents required are left at home, “forgotten” or you never had it in the first place, a small fee can be negotiated.

6. Things to bring on a road trip 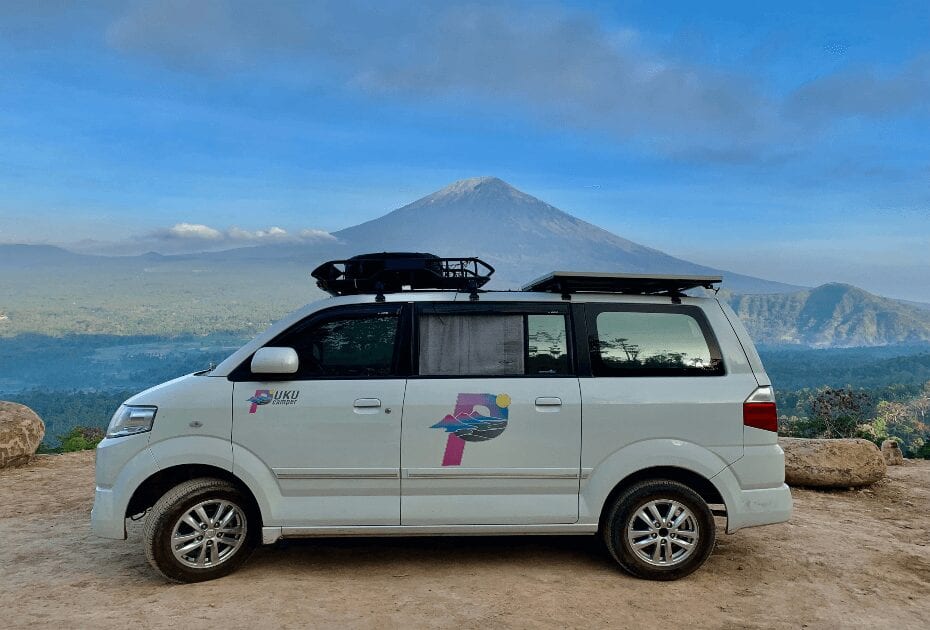 While most locals would never dream of wearing a helmet, there is pretty much no chance of surviving without one if you are a tourist. It is extremely easy to fall off the bike even for expert riders. The traffic is surprisingly not the main issue, as the roads are often potholed and covered in gravel, moreover, the roads are incredibly polluted as nobody uses public transports. Having a breathing mask on can help the lungs survive the grocery run. 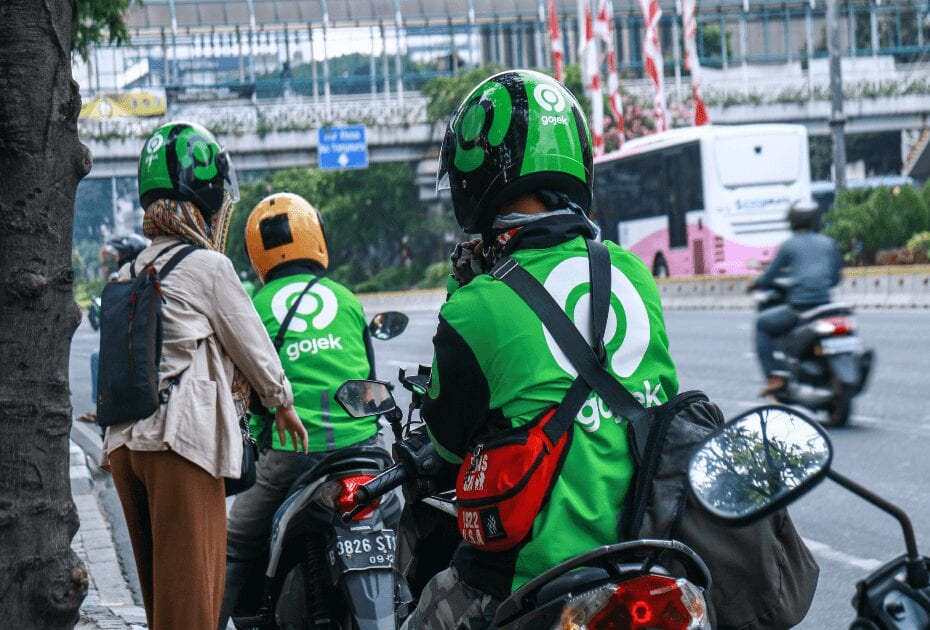 There is always an option B for anybody unwilling to take the risk of crashing on an Indonesian countryside road. The locals have turned their knowledge and availability of scooters into super-efficient apps. Gojek and Grab work similarly to the best-known Uber, but the ride is often on the back of a local motorbike.

Also, pick-up points can vary as regular taxi drivers aren’t particularly happy with this introduction and tend to threaten Gojek and Grab’s members. This is the perfect way to experience the roads but try not to panic when the driver speeds through unstable bamboo bridges hanging mid-air over a river.

The added bonus to this option is that these apps also deliver local takeaways, so no need at all to get on the roads for dinner. Ultimately, driving in Indonesia is part of the experience and it can be great fun. There are dangers to be aware of and do take precautions when and if you do decide to go on a drive. However, the pace of life in Indonesia is, as its traffic, is fairly slow so just by driving carefully most of the risks can be avoided. 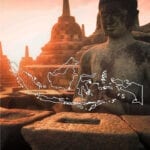 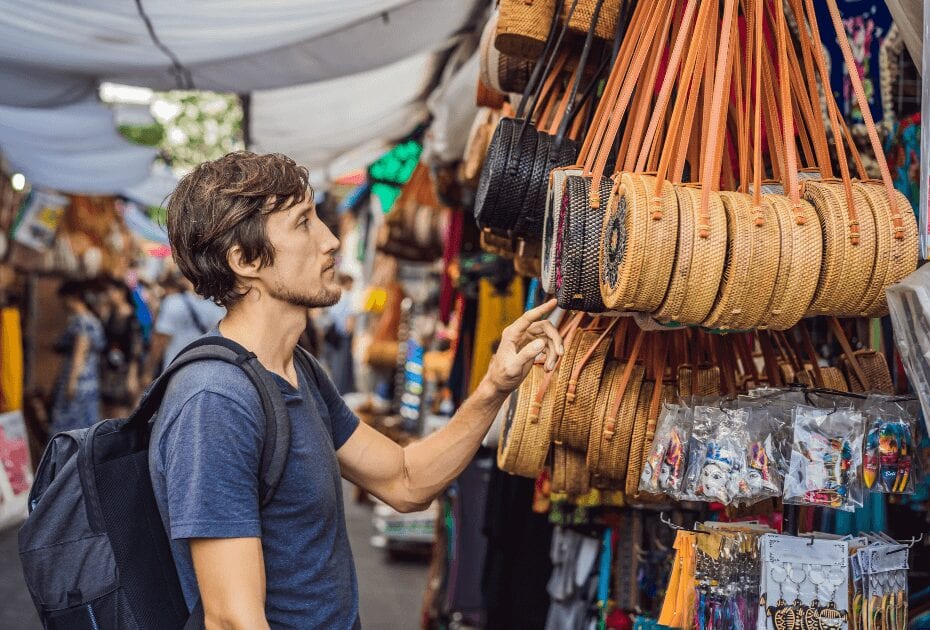